Bangkok is a gateway for travel throughout Southeast Asia. You can go to endless places (often cheaply) from the city’s airports, train stations, and bus depots. I want to take advantage of that as much as possible while I live here, with a special emphasis on train travel.

My first trip out of Bangkok started with a 100 baht, or $3.08 USD motorcycle taxi ride to the Hua Lamphong Railway Station. Since becoming accustomed to motorcycle taxi etiquitte, I realize that my first few rides in the city must have horrified the driver. Instead of gracefully balancing on the back of the bike holding onto the seat as Thais do, I molested the first two or three Thai men by squeezing their waists intimately. Oops! 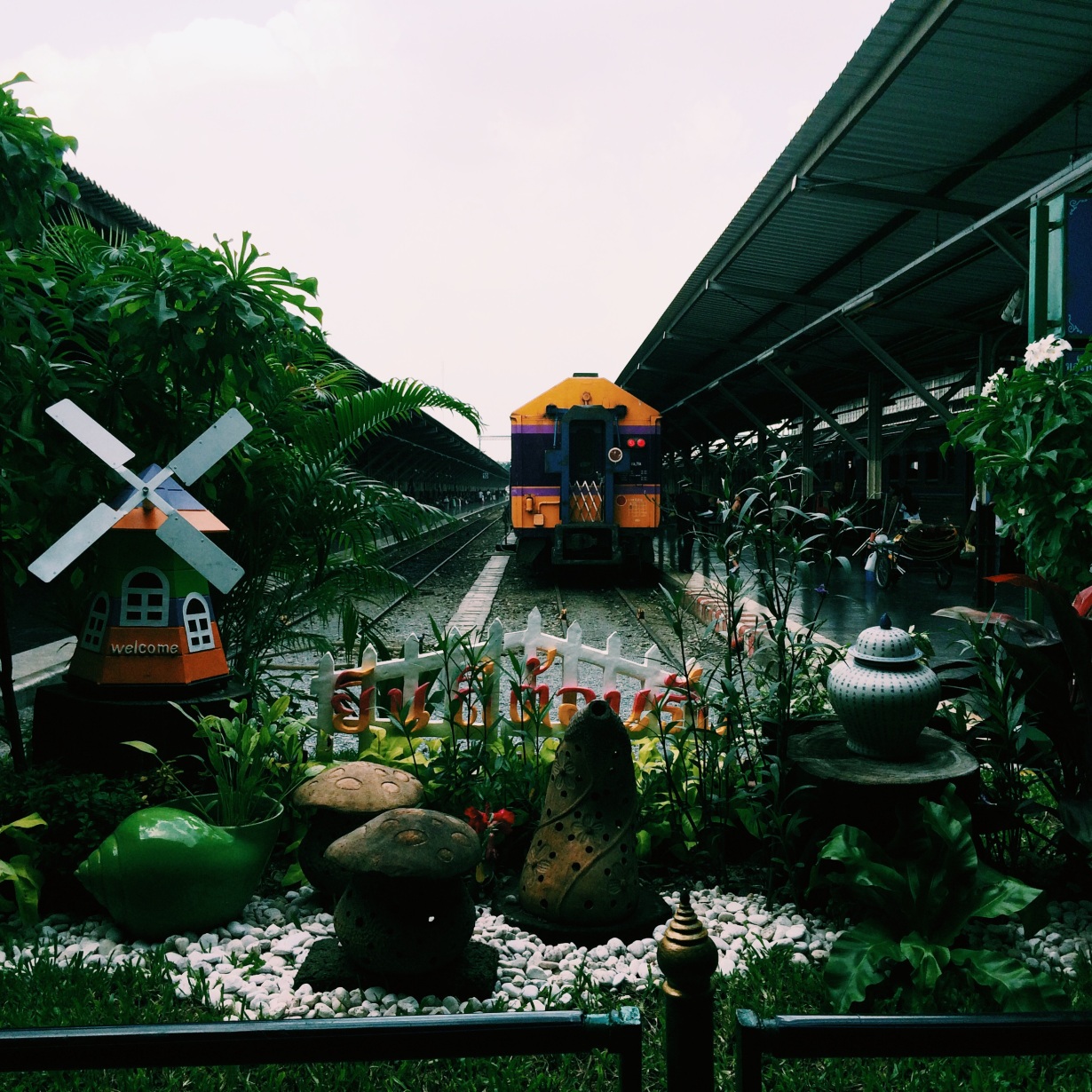 When I got to the train station, I had no idea where I wanted to go. I knew that I wanted to go somewhere with a beach, and that I didn’t want to go anywhere 12 hours away. The clerk at the information desk suggested Hua Hin, a quick four hour ride. A coworker had recommended the seaside town, so I bought a third class ticket for just 94 baht, $2.90.

I packed light and overdressed for the trip. I shoved a change of clothes, a book, and some toiletries in my work purse. Being a solo female traveler, I wanted to make sure I did the trip as safely as possible. No laptop, briefcases full of cash, etc. My thought process for the overdressing was that if I looked as far from a backpacker as possible, people might treat me less like a backpacker (take advantage of me, price gouge, murder, etc.). It was also by default because I brought about 90% work appropriate clothing to Thailand, so casual isn’t really my go-to.

I got on the train and walked back and forth like a crazy person a few times before finding my seat, 57A. I lunged toward the window as I had already begun to sweat intensely. The heat was alive and well, and I needed the air condition-free train to start moving ASAP before I drowned in a pool of my own sweat. A woman and her daughter dressed in hijabs were my seat buddies, and I couldn’t stop thinking “HOW HOT ARE YOU IN THAT HIJAB AND FULL LENGTH GOWN?!”

We started to leave the station and I braced myself for the life-saving breeze that was sure to come. We began to pick up speed and then stopped picking up speed, holding a very mediocre pace. The wind in my hair I dreamed of was more of a slight puff, and I would continue to pour sweat the rest of the journey, using my spare shirt as a sweat rag. 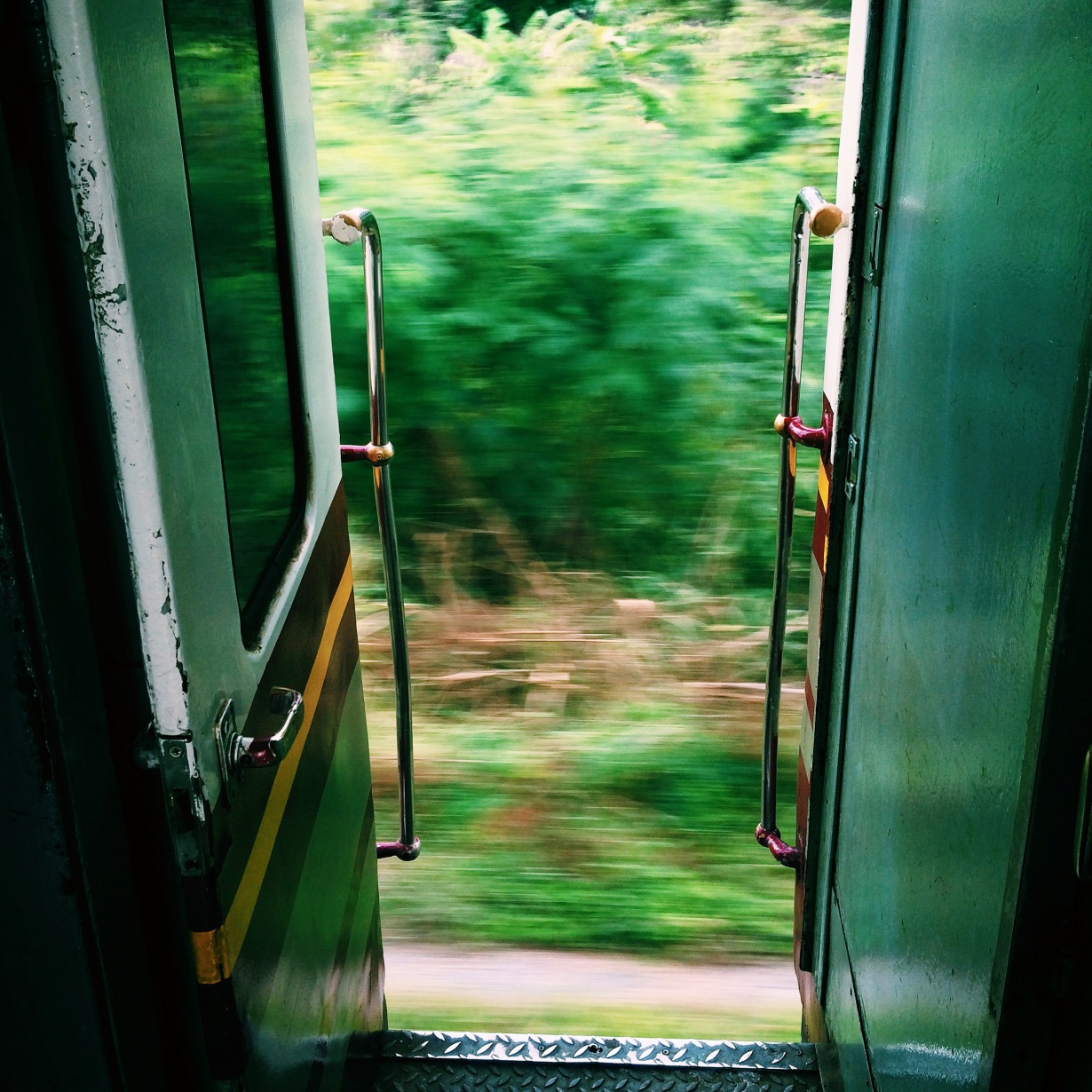 I was the only farang (foreigner, usually white) on the train and felt out of place. I was clearly having a hard time with the sweating, and my traveling companions were kind to me. Despite the language barrier, the woman and her daughter offered me snacks like pork (which I couldn’t eat) and boiled peanuts (which I could and did) throughout the journey.

My heart seized up when the woman THREW HER STYROFOAM TRASH OUT OF THE TRAIN WINDOW! Coming from San Francisco where environmental awareness is king, I was blown away by the blasé act. WHY ARE YOU LITTERING IN YOUR BEAUTIFUL COUNTRYSIDE?! It’s hard not to be culturally insensitive/ethnocentric during such events when the behavior seems so wrong. I have to remember that this isn’t my country- I have to cool my jets and accept things the way they are.

Although the woman at the train station said Hua Hin was a quick four hours away, the trip ended up being six and a half hours of sweat, snacks, and culture shock. I arrived at sunset and walked through the town known to be loved by Thailand’s royal family. Being on the water, there was seafood galore in the restaurants and food stalls. 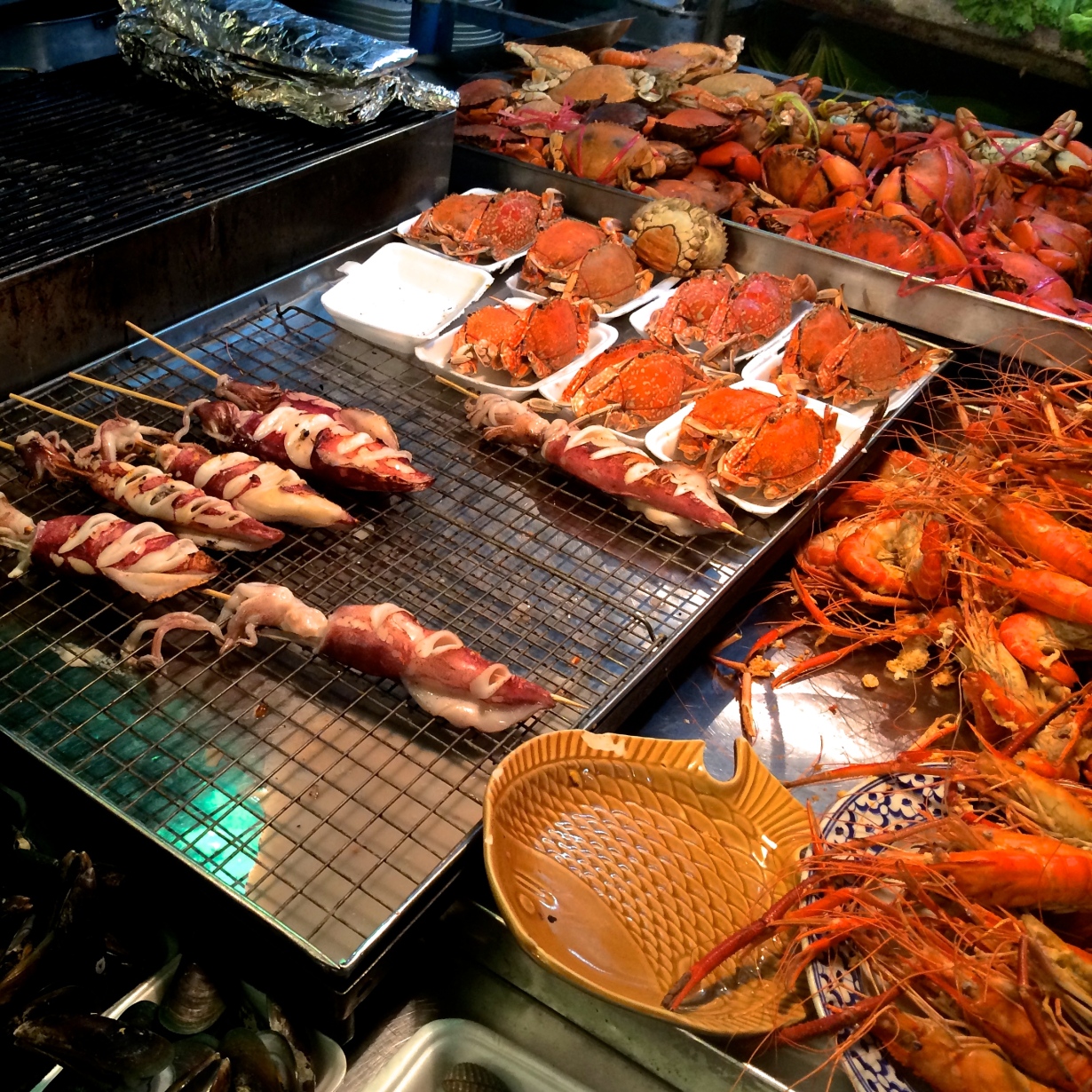 I had a delicious seafood stir fry dinner and went hunting for a fun bar to grab a beer. My goal was to find fellow travelers or expats to chat with about life in Thailand, what’s up in Hua Hin, what the hell is going on with all of the styrofoam, etc.

September is not a particularly booming time for tourism in Thailand, but the demographic that travels year round are the sexpats, tourists who visit Thailand (or move here) for the prostitutes. While most of the bars in Hua Hin were empty save a few Thai women, there was at least one or two old white men pawing at the beautiful locals selling their services. It was a depressing place for a lonely American girl to wander. I walked around for hours in search of a place with younger patrons, but had no luck. I gave up and had a beer at a nearly empty restaurant before taking a 15 minute truck taxi to my hotel. 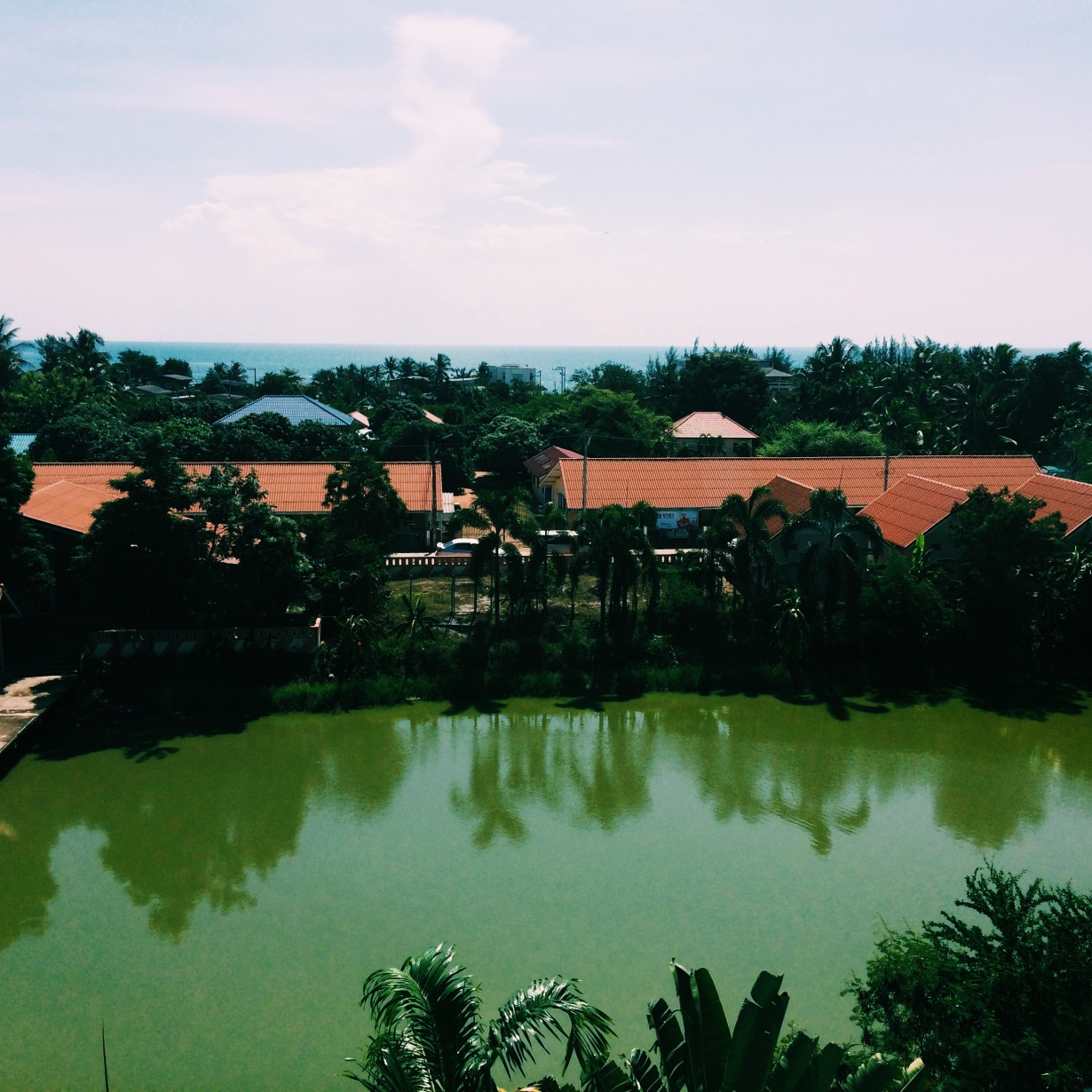 In the morning, I woke up reenergized and ready to enjoy Hua Hin’s shining feature- the beach! The hotel offered a shuttle to a nearby beach and I took advantage of the ride at 8 am. I didn’t want my phone stolen while I was frolicking in the sea, so I left it back in my room, taking only a book and towel. The hotel shuttle promised to pick me up in an hour and dropped me off at the beach. I stepped onto the sand and was overwhelmed by the smell of dead fish and trash coming from the dead fish and trash strewn about the near-empty beach. Great!

I shook off the initial disappointment and decided to spend my time in the ocean and waded in, delighted to be in the water. The water too smelled like trash, but I didn’t mind. Another blow to my enthusiasm came when I noticed fat jellyfish floating around my legs. I bolted out of the water dejected and decided to read on my towel in the sun.

Not two minutes later, I heard a noise and looked up. A man was masturbating aggressively staring at me 50 ft away. I looked down instantly and panicked. What the f was I supposed to do? He started to yell noises at me to get my attention, and I realized that I was the only person on the beach. Alone, scared, confused, and grossed out, I put my clothes back on as quickly as possible and power walked down the road I came from. I wanted to run, but the packs of stray dogs have been known to attack people and I didn’t want to get their attention by flailing through their territory.

Fortunately, the man did not follow me down the road and I made it back to my hotel safely. I couldn’t report the incident to the hotel because the thought of explaining the scene with the language barrier seemed insane. I huddled up by my hotel pool and felt very weird about the whole experience. A night of sad sex tourism on display and a day of indecent exposure was not what I had intended for my weekend getaway.

I ended up taking an overpriced taxi back to town after a lackluster breakfast at the hotel. The thought of riding back on the train for six and a half hours after the let down was not enticing, so I took an air conditioned van back to Bangkok. It was very uncomfortable, but only took three hours and got me back in time for a late lunch with friends in the city.

While I enjoyed the experience of train traveling alone, Hua Hin was not my favorite and I don’t think I will be going back any time soon. Fingers crossed for a better adventure next time!