It’s been about two and a half weeks since I moved to Bangkok, so I still have a free pass to do cliché, touristy things. And touristy things I have done! Haley and Amber (the friends I flew over here with) ended their jaunt through Cambodia, Vietnam, and Thailand with a visit to Bangkok. First item on the agenda: take them to a rooftop bar.

We headed to just the place after eating at a tourist-focused restaurant near Cheap Charlie’s. At Above 11, a bar on the 3oth-something floor of the Fraser Suites, we met up with my coworker and his group.  The view was fantastic, and we had a great time hearing about their travels and swapping culture shock moments. Also great: the wild maze (literally, a hedge maze) leading to the bathroom. 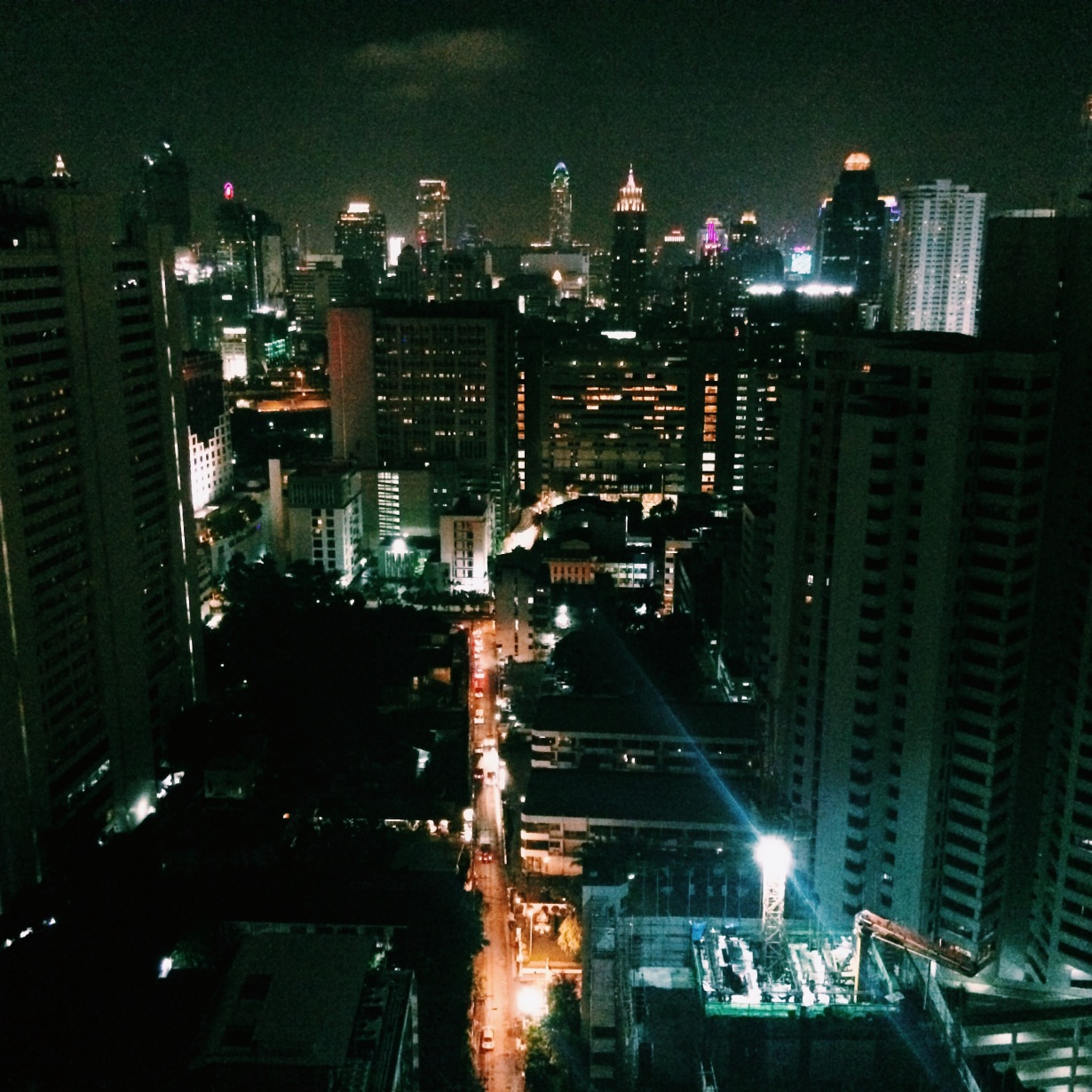 After work the following day, Haley and I intended to find a night market in Chinatown for street food. Instead, we ended up stopping at the night flower market on accident, a very sweet-smelling accident. We walked around and ate some fried street snacks before stopping at a food stall as it started to rain. Although we wanted the most touristy dish on the planet (Pad Thai, of course), we settled for for mixed vegetables and rice (and giant beers). 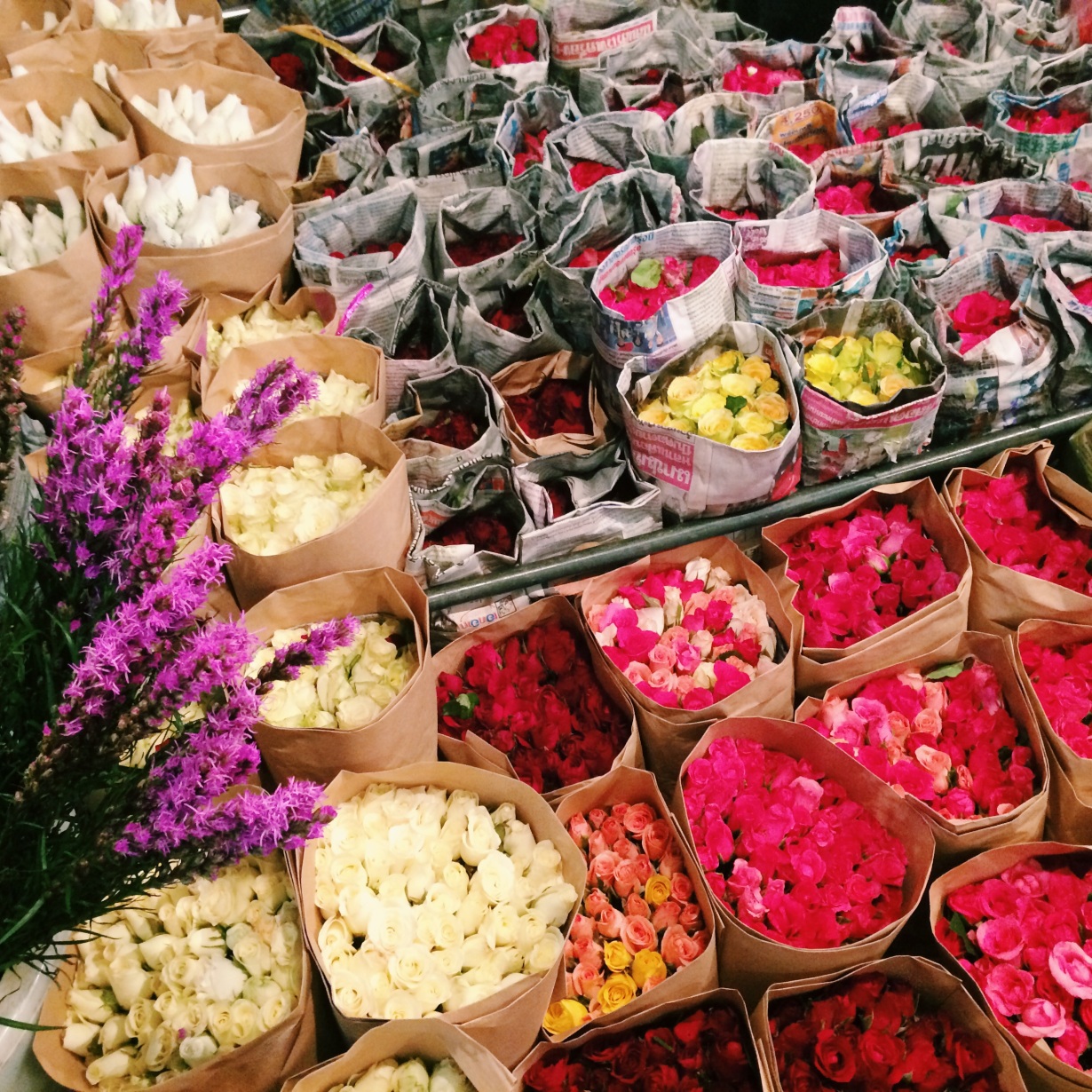 After the meal, we took a tuk tuk to meet up with a new friend Jeff, a British expat fluent in Thai. He suggested Khao San Road, aka “the center of the backpacker universe” and I was excited to go and see the infamous area. You couldn’t take a photo without three plastered tourists attempting to photobomb your moment. Instead of a bucket of cocktails, Haley and I had fresh coconut ice cream served brilliantly in a coconut. 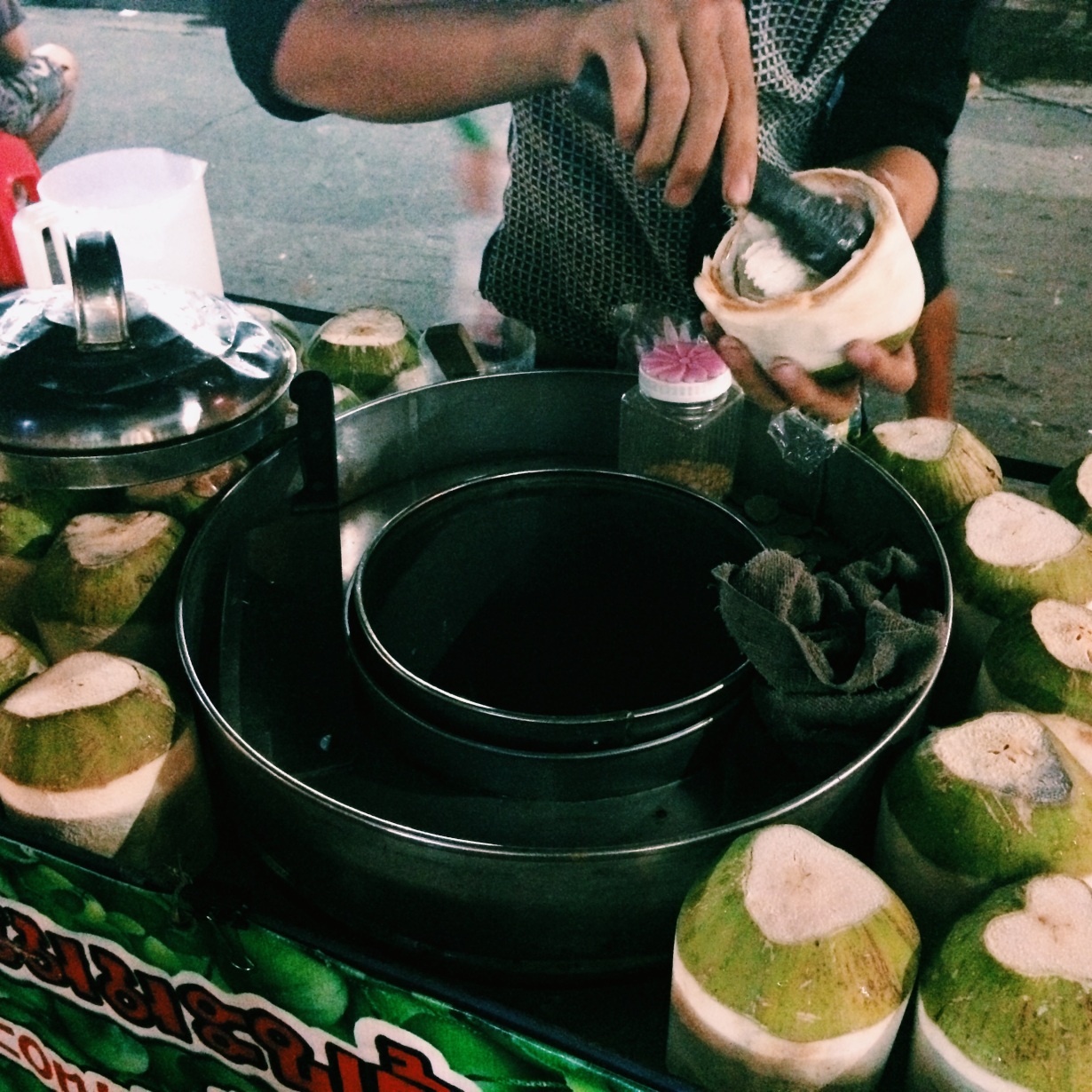 We fought through the hoards of drunk tourists and pushy vendors until we found Jeff. A few minutes of weaving our way through the neighborhood, we settled into a bar away from the chaos of the main road. We learned a lot from Jeff, who is expertly versed in the Thai language and culture. The night was great, even after being swarmed by the laughing gas salesmen of Khao San Road. Another item checked off of a standard Bangkok bucket list.

On Thursday, Haley met me after work for a Vietnamese dinner with my coworkers. I didn’t realize that the Vietnamese did flan, you learn something new every day! As tourists do, we walked to the Patpong night market after dinner. The red light district is not necessarily my favorite place to go, but we wanted to see a night market and the one at Patpong was nearby. It had the usual suspects: elephant-print clothing, ping pong show hawkers, and bizarre trinkets that you would truly never need (I’m looking at you, Coca-Cola clock).  We spied a tattoo parlor and I decided to go for it, having thought about the idea of getting another tattoo for a few days. Thai culture seems to have a soft spot for tattoos, and “When in Rome” seemed like an easy justification for a bad idea.

I walked up to Billy’s Studio (billystattoo@hotmail.com for any interested takers) and grilled the men about the cleanliness of their needles. Feeling convinced that the transaction would be clean (although still ridiculous), I went in and sat on the black leather bench and showed the men what I wanted. Feeling nostalgic for San Francisco, I went with the coordinates of the city I left just two weeks ago.

The tattoo artist turned on Pitbull to accompany the experience, but he motioned for us to pick the music from YouTube ourselves. DJ Haley took requests and played some favorites to ease the pain. The playlist included, but wasn’t limited to:

Santigold– Pirate In The Water

When it was over, I looked down at my new, permanent addition to my body. It sort of looked like a prison-esque tattoo which was definitely not my intention. I probably should have thought a little more about what exact coordinates of San Francisco I would like to see forever, instead of an apartment building  for the homeless in the Tenderloin. When making forever decisions, maybe throw some thought into it – or not. I paid my 1,000 baht ($30) and left. 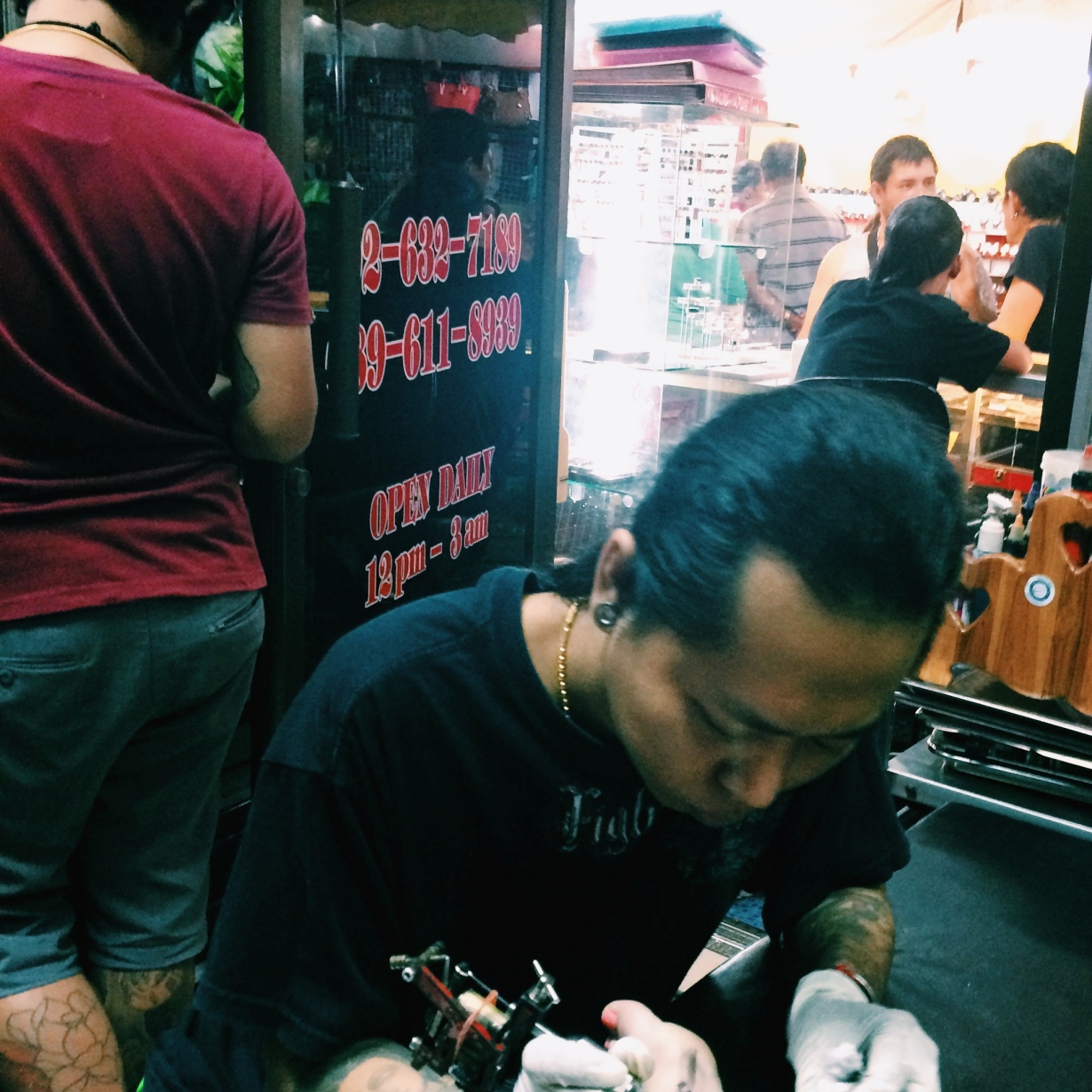 Haley and I walked around a bit more before finding some street mango and sticky rice being prepared with the utmost care by an old Thai woman. We waited patiently as she carved our favorite Thai dessert, then ate it on the side of the road. We watched people walk by, passing the lined up prostitutes waiting for customers. The sheer volume of sex workers in Bangkok is mind-blowing. We left feeling sad and full.

Haley packed up her belongings and e-checked into her flight for Bali. It was great to have her and Amber as houseguests, even if it was just for a short period of time. After her Indonesian getaway, Haley will be moving to Chiang Mai to do an epic internship, and I can’t wait to visit as often as possible.

I doubt this week will be the end of my cliché activities in Thailand, but it was nice to get some of the most touristy things out of the way early. Up next: ride an elephant while eating Pad Thai.

One thought on “Cliché Bangkok”